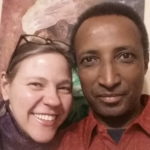 Jen is white and grew up in Philadelphia, while Ermias is black and Eritrean. They met in Eritrea in 1995 when Jen was there as a Peace Corps volunteer. They had a long distance relationship for a while and just when Ermias was on the verge of leaving to come to the US, war broke out between Ethiopia and Eritrea. They eventually got married shortly after the war ended in … END_OF_DOCUMENT_TOKEN_TO_BE_REPLACED

Lori and Manuel have been married since 1999. Manuel is white and grew up in Spain. Lori is black and grew up in Wisconsin. They met at university in Spain, where Lori was studying abroad; eventually Manuel joined her in the United States where they lived first in New York and then in Philadelphia. In this episode of the Loving Project podcast, Lori and Manuel talk about … END_OF_DOCUMENT_TOKEN_TO_BE_REPLACED 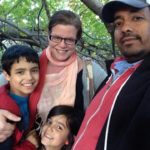 Arun and Carrie got married in 2001; Arun is Indian and Carrie is white. Both grew up in Northeast Ohio, and they now live in Philadelphia with their two children. Arun grew up in a close-knit Indian community where arranged marriages were the norm; theirs was the first interracial marriage to be openly accepted in that community. The couple talks about the long road it … END_OF_DOCUMENT_TOKEN_TO_BE_REPLACED

﻿ 2017 marked 50 years since interracial marriage became legal across the United States. Over the course of the year, … END_OF_DOCUMENT_TOKEN_TO_BE_REPLACED