On June 12, 1967, in the case of Loving v. Virginia, the United States Supreme Court unanimously ruled that state laws prohibiting mixed-race marriages were unconstitutional. To commemorate the 50th anniversary of the ruling, the Loving Project is documenting the experiences of couples whose marriages would have been illegal in some states prior to 1967. Our goal is to celebrate a landmark in civil rights but also to explore what it’s like to be part of a mixed-race marriage at this time in America’s history.

The podcast series runs throughout the year with new episodes being released every other Monday.

We’ve also put on/participated in special events related to the anniversary including: 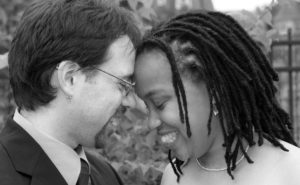 The Loving Project is produced by Farrah Parkes and Brad Linder, an interracial couple living in Philadelphia, Pennsylvania where they share their home with three very spoiled cats. Brad is an award-winning journalist whose work has aired on NPR and WHYY. Farrah is a non-profit professional who dabbles in social justice activism. They have been married for over 10 years.

﻿2017 marked 50 years since interracial marriage became legal across the United States. Over the course of the year, … END_OF_DOCUMENT_TOKEN_TO_BE_REPLACED