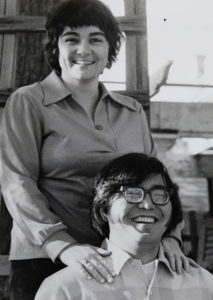 Jean and Mas have been together since 1972 and married since 1992.  Jean is white and was raised in Rochester, New York. Mas is Japanese-American and he was born in an internment camp during World War II and grew up in Seabrook, New Jersey.

Both longtime civil right activists, Jean and Mas met while they were both working for the American Friends Service Committee in Philadelphia.

They have two adult children and three grandchildren.

In this episode of the Loving Project, Jean and Mas talk about how their different backgrounds affect the way they communicate and how they’ve learned to navigate the world together.