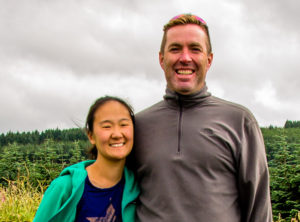 Ken is Irish and Mee is Korean-American. They met when Ken flew from Ireland to the United States for a friend’s wedding, and the two quickly hit it off and began a long distance relationship.

For a couple of years they flew back and forth between New York and Dublin to spend time together. The turning point in their relationship was September 11; as he watched the Twin Towers fall, Ken realized he didn’t want to be thousands of miles away from Mee. Soon thereafter, the couple began the emigration process and Ken moved to New York. They now reside in the suburbs of Philadelphia

In this episode of the Loving Project, Ken and Mee discuss the immigration process, the similarities and differences between Korean and Irish culture, and raising biracial children to appreciate both of their parents’ cultures.